In the past, many nations fought to own and control the island of Saint Barthélemy, also referred to as St. Barths. Its natural beauty and unforgettable distinct qualities from other Caribbean islands made Saint Barthélemy an island to desire and fight for. 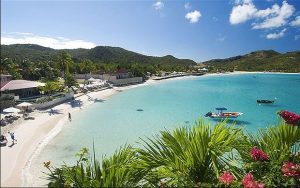 St. Barth’s was first named by the Arawak Indians who gave it the name “Ouanalao” which perhaps referred to the iguanas that once populated the island. Christopher Columbus discovered St. Barth’s island in 1493 and named it Saint Barthélemy after his younger brother whose name was Bartolomeo.

The French were the first to attempt to settle on the island in 1648. Their settlement was unsuccessful and barely two years later, the island was sold to the knights of Malta. The Knights made efforts to grow cotton, indigo and developed breeding practices, fishing and salt farming. This was also their efforts towards the colonization of St. Barth’s, however, their settlements were destroyed by the Carib Indians in 1656.

In 1763, the island was reclaimed by French Mariners from Normandy and Brittany. While French buccaneers helped improve the economy through provision of loots from Spanish galleons.

Stories of piracy grew in St. Barth’s, some of the stories inspired characters such as Red Rackham and Captain Hook, including a famous buccaneer named Monbars the Exterminator who had his headquarters on the Island. His treasures are believed to be hidden somewhere on the island; perhaps in sands of Saline or in the coves of Anse de Gouverneur.

As France continued to fight to regain ownership of the island, Britain took control of it in 1744, and after 20 years, the island was returned to France. However, in 1784, France lost control of the island again, after it was sold to Sweden as a trading possession by King Louis XVI.

Sweden made the port tax free which transformed the port into a trading center. The port was named Gustavia to honor King Gustave lll. Vessels came from different parts of the world to Gustavia, ships captains sold their plunder to St. Barth’s and filled up their cargos as well. Businesses flourished until the island’s economy was brought down by natural disasters.

France eventually reclaimed St. Barth’s in 1878 after buying back the island for 320,000 francs.

Though St. Barth’s Island is still loosely lead by France, parts of the island’s captivating Swedish History, such as castles and the Swedish Capital Gustavia are still present on the island till date.